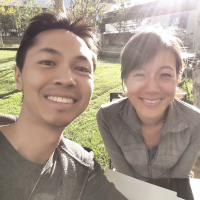 I was born in Los Angeles almost 40 years ago to a mother from China and father from Hawaii.  My mother is a first generation immigrant from Toishan near Guangzhou who came to Los Angeles when she was five years old.  My father comes from a long history of Chinese and Hawaiian ancestors on the island of Oahu.  As an adult, he moved to Los Angeles and met my mother.  They married and settled in Palos Verdes where they raised my younger brother and I.  In spite of my father's Christian upbringing in Hawaii, I grew up mostly secular and only attended church on Christmas and Easter.  In fact, my earliest exposure to Christianity was actually at a Greek festival because my parents love Greek food.  Little did I know that the best Greek restaurant in town was actually an Orthodox Church.  This would prove to be quite prophetic many years later.  My family also loves Japanese culture, despite the painful memories of my maternal grandparents who were survivors of World War II.  Indeed, my mother's sister even married a Japanese man, much to my grandparents' dismay and my parents always set an example of appreciation for Japan, especially their food of course.  My paternal grandparents in Hawaii were masters of Japanese bonsai and even learned Japanese so they could study with the local teachers and become teachers themselves.  I hope to carry on their devotion to this culture in my practice of Japanese tea ceremony that recently began with the Los Angeles school of Edosenke Fuhakukai.  Our tea sensei, Setsuko Nishimura approaches her teaching as both a cultural treasure and a spiritual service to draw her students closer to God.  She became a devout Christian through the love of her American neighbors who helped to save her family's home during their internment in wartime and for over fifty years, she has shared that love through a bowl of tea.  My own journey to Christianity really began in college when a classmate, who is now a dear friend, had shared the Gospel with me when I was most prepared to receive it.  Over the course of our freshman year, we would discuss and debate spirituality and my once apathetic attitude toward the Christian faith gradually turned to genuine seeking and then inevitable acceptance.  I received Christ as my Lord and Savior in my sophomore year, exactly twenty years ago this year, and was later baptized in a local Presbyterian Church.  The next milestone in my journey took place in Israel where I studied abroad during law school and experienced the pilgrimage to the Holy Land that so many have made.  It was there that I saw the deep Christian roots and apostolic traditions that trace back to the early Church.  Most of all, I was humbled and speechless by my encounters with Eastern Christianity and the beauty of their heritage and culture, much like the Japanese culture of tea.  I found it truly nourishing to steep myself in such timeless traditions and to trace the origins of things like my name Christopher, which comes from the Greek name Christoforos, meaning "Christ-bearer".  My parents named me that because it has multiple syllables to balance out my last name that has only one.  Little did they know what it meant or that it is even Greek, just as little did I know that my favorite Greek restaurant was actually a Church.  Over 30 years after my first Greek festival, I would return to St. Katherine Greek Orthodox Church, only this time it was for a different kind of food and drink, the eternal kind.  In 2018, the same year that I began to learn Japanese tea ceremony and serve Matcha, I became an Orthodox Christian and received the Eucharist.  Our priest, Father Michael Courey approaches his ministry like Nishimura Sensei approaches her teaching.  They bring culture and spirituality together to draw us closer together and closer to God.  Now that we must be socially distant for our health and safety, my hope for this course is to grow closer together and closer to God for the culture and people of Japan.